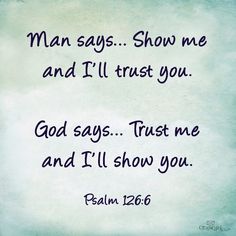 So I came across a video on YouTube yesterday and the person was questioning the Bible as well as Christianity. One thing that is always puzzling to me is why are there so many people who feel like they must question the Bible and Christianity. I mean they are nonbelievers so why care so much about our Christian beliefs. Anyway he spoke of having physical evidence that supports the Bible. Look having evidence are my personal testimonies that can not be explained away. Most Christians have testimonies which is evidence even though we don’t need it because we love God that much. Why else is there such a huge Christian following? Millions of people can’t be wrong. America was founded on Christian beliefs. People swear on the Bible in court need I go on?

This is what I have figured out about nonbelievers they just want to do what they want and don’t want to change for the better. Being good, doing good, being smart, being good looking or being rich won’t get you into Heaven. The internet is an excellent tool but it can make people think that they know everything. Newsflash everything on the internet can not be taken at face value. Sometimes being so smart can actually cloud your mind and make one closed minded. Listen faith is the substance of things hoped for, the evidence of things not seen. We can’t see air but we are breathing right. In fact air is the most important thing that we all need in order to live yet we can not see. Hmmmmmm imagine that. I have a problem with people who have to see everything in order to believe it. Having more faith in a chair that it will hold them or more faith in stranger that prepares their food in a restaurant. How weird is that? I don’t push my beliefs on others but I won’t lie I get really offensive when people try to come against what I believe.

Look I have faith in God and I’m a proud Christian if you don’t would to believe fine. But please stop trying to dismiss something that you don’t believe in the first place. A nonbeliever cannot shake my Christian beliefs or make me doubt when God has done so much for me. A human don’t have authority over my faith I don’t care how smart they think that they are it wouldn’t happen. People think that they are so smart that they lose respect for others which only shows you their morals which are very little which says a lot about them as a person. Making yourself feel like your superior based on things from the internet or wherever you got your information from. There is absolutely nothing  that no one can tell you that  will convince you no matter what is shown or what is told to you. Okay you don’t believe in Christianity I can’t say that I get it but I can ask why does a nonbeliever have so much interest in something that they don’t believe in? Something about Christianity peaks your interest so much that some of you make it your mission to dismiss it. Why? Think about it.

I think I know what it is father. I finally figured out what it is bout ya. I figured they know that if you exist there’s a lot of sin they love doin they gotta quit father. And the only ones callin it a fairy tale are the ones for which the story doesn’t end as well. Maybe they like it better if they mention hell, like a thief if the law never said he went to jail. I was seekin the truth, found it and I submit already. They just want the truth that agrees with how they feel already. So if they like the sin and they tired of fightin it, they just find another god that don’t mind it then. We got so used to democracy, we think we have the right to vote who we want God to be. God will be God with or without you, honestly. Your father is still your father even if you decide to leave